The 612 Interview with Hayden Joseph 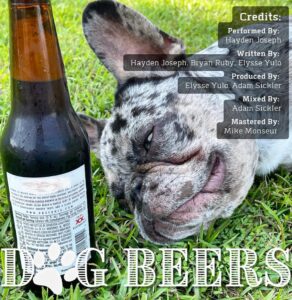 If you were to write an intro for “Dog Beers” before it played on the radio, what would you want listeners to know about the song?

6 Things You Don’t Know About Me questions:

South Carolina native. Nashville resident. First musical memories were of Shania Twain‘s music, songs that “unapologetically shattered country music’s sound and image.” You hope to meet her and collaborate with her. If you could send her one of your songs as an introduction, which one would you share and why?

Oooh good question. I would send her my song “Out.” Shania’s music is overwhelmingly celebratory of who she is — as an individual, as an artist, and as a woman. The “sound” of her upbeat songs is also explosive. “Out.” is my “this is me” song — it makes a statement and pops off on any set of speakers. I think Shania would appreciate it, both because of its meaning, as well as the cross-genre influences that can be heard when you listen. I learned from the best :).

Contemporary Country. Mainstream Pop. Inspired by genre-bending melodies of Shania, Garth Brooks, and Taylor Swift. Swift is your biggest influence as a songwriter because you feel that she is the best at putting emotions into words. In terms of the overall composition, which song of hers is your favorite and why?

This is a tough one. I can’t pinpoint a favorite track (because there are SO many), but I can say my favorite album is Fearless.  That album came out when I was ~14, and directly coincided with when (and why) I wrote my first songs. The writing was innocent, but intimate and deep. I felt like she was writing that album for me, and so many other teenagers did as well. I remember saying to myself, “I want to write something like this. I want to wrap my (then teenage) emotions into music the way she does.”

The first song I ever wrote is called “You’ll Come Around,” and it was directly inspired by Taylor’s writing on early hits like “You Belong with Me” and “Teardrops on My Guitar” (this track made it onto my debut album some ~10 years later). I continue to be impressed by how her writing continues to grow and change with each composition she puts out.

First single, “Different,” released in 2019, which would become the title track for your 2021 album. “As I have grown, I’ve learned to love the things that make me different, but I will never forget how it felt as a child to know something about me wasn’t quite like everyone else. I wish I could go back and tell that scared little kid that, one day, he’d celebrate his differences with the world.” What resources have you used to help you navigate through challenging times?

Honestly, it sounds cheesy, but music has always been one of the first places I look for comfort through hard times. There is really a song for everything. In terms of more tangible resources, I was lucky to have several good friends to lean on when I really began facing the reality of who I was (i.e., my “coming out” process). Around the same time, I also began therapy through my university’s student health center and have continued it through my young adult life. I would recommend open and honest conversations with a therapist to anyone who might be struggling.

You have independently built a TikTok community of 300K+ followers. Placements in People Magazine and Huffington Post, among others.

“Book Beside Your Bed,” is the song you described as your most personal. The message is that while religion plays a positive part in many lives, there are many others for whom it plays a painful part. The lyrics for “Out” came to you as you watched a subway light flashing on and off, which led you to think about every kind of word associated with the word. Your lyrics tell your story, in an open-ended way, so that everyone can connect to them. How can social media help you realize your desire to expand Country radio’s look, sound, and subject matter?

In all honesty, I never expected to build the community on TikTok that I have. I am incredibly fortunate that people gravitated towards what I had to say re: country music. I am always clear to state: I don’t want to “get rid” of the mainstream country music that you hear today. I simply want to make room for music that might sound a little different or talk about other things. When I started talking about this on social media, my following began to grow. Turns out, a lot of other people felt the same way I did about current country music. Social media allows us to reach a new audience with shared interests and goals, but you have to be authentic. If you are building a platform based on something you don’t believe, people will see through it. Figure out what you have to say, figure out what you are deeply committed to and passionate about, and start posting about those things. If there is a shared desire, people will fall in line.

“As Close As I Can Get To You,” co-written with Cole Miracle and Fran Litterski at one of your first co-writes after moving to Music City. “My biggest inspirations have always blended sonic elements from multiple genres, alongside narrative, country lyrics. I’ve aspired to do the same since I began making my own music, and this song demonstrates just that. It sounds completely different than anything I’ve put out before – placing a prominent slide guitar alongside synth and disco elements, but the storytelling is still front on center. This is honestly the third version of this song that has been fleshed out. My producer and I tried multiple directions before landing here. This song doesn’t fit within the traditional bounds of any genre, and for that I am incredibly proud of it. As artists, we are constantly growing and changing – if we are lucky, it’s embraced by fans.” You shared that the production was a challenge. Working with producer Scott Griffin, you tried a more acoustic lane, a traditional country-pop version, and one that leaned into soul elements before settling on a genre-fluid journey, beginning as a country ballad before transforming into a dance-influenced track that one might hear at a Miami Beach club. How has working from a sonic perspective embraced your desire to be known as an artist who experiments with different elements?

Like I have said previously, I didn’t move to Nashville to do it within the bounds of what a country musician is “supposed” to look and sound like. My ultimate goal every time I take a song to full production is “what is going to allow this song to sound the best and reach its full potential?” Production isn’t one size fits all. Some songs sound better with very country elements, others sound better with a synth beat. To me, it’s really important to experiment and take risks when I feel I’ve found the right match for a song. I also think we have reached a point in the music industry where one artist can have many sounds, as long as the music sounds authentic. I certainly have other artists to thank for opening that door (Shania, Taylor, Kacey Musgraves come to mind first). My listeners know how I write, and I think many follow along with my career because of my personality and what I have to say. Those things stay consistent through any production style 🙂

I would love to become a household name. I want to prove that there is room for a proud LGBTQ+ musician in the mainstream country space. I want my music to be universal.

“Any Man of Mine” Shania Twain

The first musical memory I have. I wore the “Woman in Me” VHS collection OUT. It also just represents a shift in country music that created the only version of the genre I’ve ever known / wanted to be a part of.

“You Were Meant for Me” Jewel

I studied this song in the only songwriting class I got the chance to take during my time at Vanderbilt. I didn’t appreciate how beautiful its lyrics were until we spent a few hours going through the imagery. It gave me a new appreciation for lyrical descriptions, and it’s one of my favorite songs to cover.

“All Too Well” Taylor Swift

I think this is the songwriting holy grail. Everyone knows it’s amazing, and every time I write I breakup song, I look to this for inspiration.

I think it goes without saying, but this song is everything country music needs. And it’s exactly why I started making music.

“When You Say Nothing At All” Keith Whitley

“When You Say Nothing At All” Alison Krauss

I grew up on the Alison version, but I think this represents how to write a love song. It’s pure, simple, and timeless.

“Cowboy Take Me Away” The Chicks

The Chicks are one of my favorite acts of all time. I have so many fond memories with my mom in the car listening to their albums. This song represents how to write a poetic love song. It’s gorgeous from start to finish.

“There Goes My Life” Kenny Chesney

This is one of the best written songs of all time. It’s almost impossible to hear without a tear coming to your eyes — and I don’t even have kids yet. I think songs like this, with crystal clear stories, are what make country music so amazing.

This is country songwriting at its finest. There is story, emotion, and a sense of wonder all baked into 4 minutes. It also approaches such a basic concept in a very unique way and has thus stood the test of time. I always try to draw from this when writing my own songs.

“That Don’t Impress Me Much” Shania Twain

Part of being an artist is about attitude. Shania has it. She basically invented it xD — when it comes to visuals / how to present yourself to leave a 30-year legacy… look here.

“More Hearts than Mine” Ingrid Andress

This is one of the few songs in 2010’s country music that stopped me in my tracks the first time I heard it. It’s so relatable as someone with a tight-knit family. It came out around the time I first began recording my own music and was very much an inspiration to continue honing my craft as a writer.

This song had a chokehold over every southern mom in the early 00’s… mine included. It is a beautiful song, and a message that has been ingrained in me since it came out. I appreciate it more and more every time I hear it.

This is the first song I ever covered / played guitar for in public. I ended up winning the competition, and it just represents a time in my life where a dormant music spark began to get a little brighter.