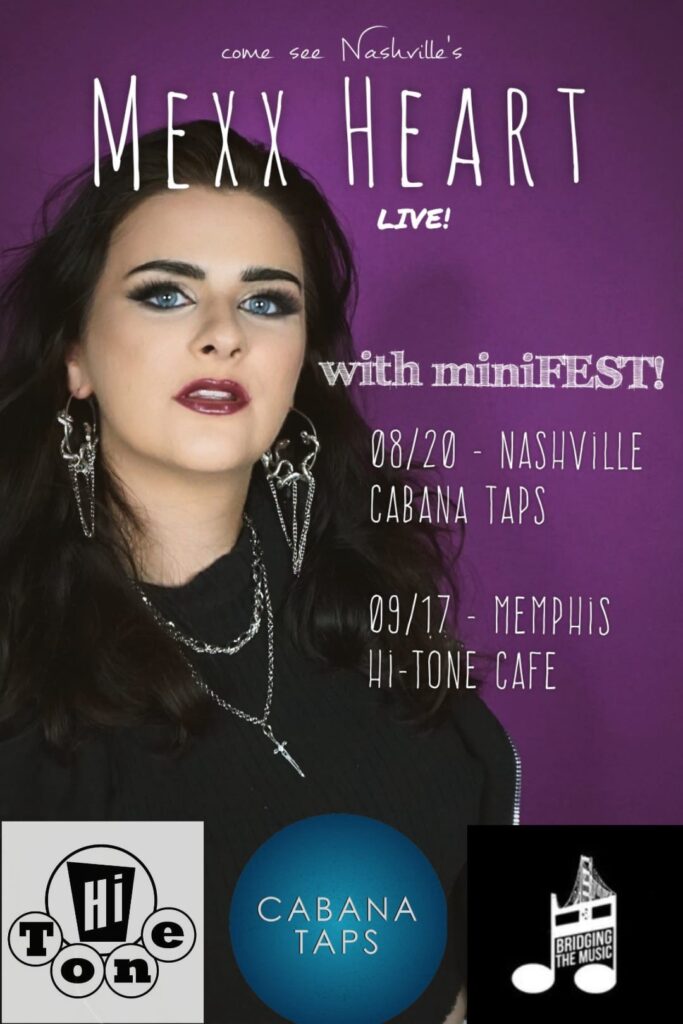 Raised in Memphis, Tennessee, Mexx Heart discovered her passion for music at a young age. When she was a child, her father would blast his favorites through the radio, heavily influencing her eclectic musical tastes. Inspired by artists like Green Day, Billy Idol and Van Halen, Heart has cultivated her own unique sound.

In the spring of 2020, she released her first single entitled “Roses.”

She released her following singles, “Comatose” and “Skipping Stones,” that September.

In February 2021, she released a cover of Green Day’s “American Idiot.”

Her acoustic single “Another Chance” released in May of this year.

She plans to release a full album later this year, featuring a new sound influenced by Taylor Swift (Evermore), The Band Camino and Kingston Hythe.

Heart continues to leave her mark on the music industry, showcasing her skills both behind the mic and in the studio.

Heart was nominated for a coveted Josie Music Award in 2021 and attended the 2022 Grammy Awards with producer Justine Blazer. She had the honor of performing at Barry Manilow’s Grammy afterparty as well, which took place at his luxury penthouse.

An activist for Indigenous Rights, Mental Health, and Women’s Rights, she stands up for what she believes in and uses her talent to promote positivity.

Bridging the Music. Their goal is “to bring communities together with music and art through a festival-style atmosphere in prime venues.” Playing your first festivals is a big achievement. What other career goals do you hope to accomplish over the next few years

My biggest goal is to release the planned singles and find a ‘home’ for my upcoming album. The album is influenced by Taylor Swift’s Folklore and has more of an acoustic sound to it than my previous songs did. It’ll be hard, but I’d really like to try and find a label, too.

You will be performing at the Nashville miniFEST on Saturday, August 20th, at Cabana Taps. Will you be playing any new songs?

Yes! My entire setlist will be all new songs from my upcoming album! I’m so excited to play them. My most recent single called “Another Chance” is currently available on all digital streaming platforms.

Tickets for Bridging the Music’s Nashville miniFEST can be purchased here.

Your second show will be at the Memphis miniFEST on Saturday, September 17th, at Hi-Tone. Will you be playing “Pretend” (instrumental arrangement by Zelle Zuzana) that you recently posted a demo alert for on Instagram?

Yes, I will! I don’t want to reveal all of the setlist plans quite yet, though. I do have some surprises planned as well. I hope everyone comes out to support us!

Tickets for Bridging the Music’s Memphis miniFEST can be purchased here.

Zelle Zuzana will be your guitarist for the shows. They has worked with several award nominated artists such as Kyla Silk, Z the Author, and Mark Manning as a session guitarist. They produces electronic music and works as a DJ. Any collabs in the works?

Other than the upcoming album, not really. However, working close with them over this time has really strengthened our relationship as songwriters and creators. We plan on working together and making music for a very long time.