Brandon Stansell’s This Must Be The Place – “I hope it makes you smile and laugh and cry. I hope it does for you what it has for me — given me a little more healing, a little more happiness, and a little more hope than I had the day before.” 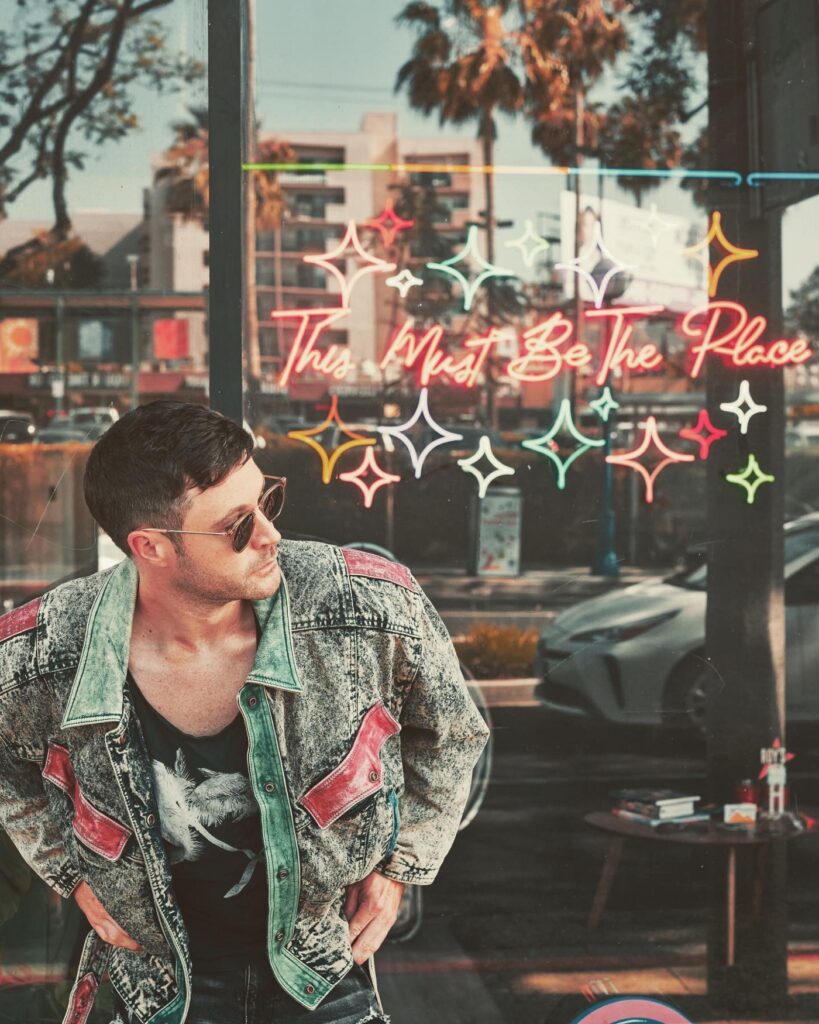 An utter fascination with Elvis Presley. Growing up in Georgetown, Tennessee, folks told you that you had the ‘gift of happiness.’ Years later, after much time thinking that sounded kind of stupid, you realized that this could be what has allowed you to laugh and smile along your journey, one with real lows and pretty incredible highs, and the opportunity to break new ground for those who come after you. Trailblazers, like yourself, inspire others to reach higher, dream bigger. Can you share the moment when you realized your gift was one that was best shared?

Gosh, that’s a hard one to answer… anyone who ever hesitated on the edge of a career in music knows the feeling of thinking it might be all just a dream in your head. So the truth is I started sharing my music before I really believed anyone would care. I sang, because I had to sing. It was how I felt happy, and how I let go of sadness. It made sense of life. It was only after I’d taken that leap of faith, and people started listening, and sharing, and telling me how my music had helped them, like it helped me, that I got that confirmation. And to now be able to share that music with people all over the world, that just makes it even sweeter.

“I think that everyone wants to hear their story told.” You were a backup dancer on Taylor Swift’s Fearless Tour.

A fellow tour member, Charity Baroni, supported you through a very difficult time, “… because of her, I felt like a giant weight was lifted from me. I’ll never be able to repay that kindness….” In 2017, you entrusted your career to manager Ryan Aceto.

The following year, “Hometown” was the first LGBTQ-themed video to ever air on CMT (it was named one of Rolling Stone’s 10 Best Country Videos of the Year).

Ty Herndon has become one of your most fierce advocates. Which other artists have most influenced your journey?

Ohhhh boy. I wouldn’t be where I am today without any of the people you just mentioned. They have all played such an important role in my life and career and I will be forever grateful. Life can be hard, music can be really hard, so friends are important. I’ve just been lucky enough to have friends who are also inspiring artists. But in terms of other artists who have inspired me and my sound, I can really narrow it down to two (who just happen to be on opposite ends of the musical spectrum) — Amy Grant and Tracy Chapman. I don’t have words for how much I love the both of them. Their music has been the soundtrack to my life.

Documentary, Three Chords and A Lie, playing on select Jet Blue flights and available in the US at outtv.com. “This doc was the hardest but most important thing I’ve ever made — my hope has always been that it would find the people who needed it.” Produced by OutTV and Leslie Jordan, it shows the struggles you experienced with your Southern Baptist family as you prepared for your first Tennessee hometown show. What made this one of the hardest things you’ve ever made?

Three Chords And A Lie

Well you try singing a song you wrote about your mother… in front of your mother! No, that was only part of it — I said that because, honestly, initially I didn’t want to do it. I don’t think anyone wants the world to see them at their most vulnerable; this was like making a movie about the contents of your diary, and therapy, and all the things you never thought you’d admit out loud. But I knew I had to. After coming out, I watched my story repeat itself in the lives of gay people everywhere; a never ending cycle — kids getting kicked out of their homes because of the sexuality and/or gender identity. I also watched my own family begin to make light of my experiences and pretend they didn’t happen or they weren’t as bad as I was making them out to be. So the documentary gave me a chance to tell the truth. But hope is only real, if the pain is real — so to spread the hope, I had to bare my soul. But the success of the documentary took the pain of it away, and I’m so incredibly proud of what we made.

Sophomore album, This Must Be the Place. Seven writers, six musicians, one producer, and many, many months. “I hope it makes you smile and laugh and cry. I hope it does for you what it has for me — given me a little more healing, a little more happiness, and a little more hope than I had the day before.”

This Must Be The Place

You shared that the inspiration for the new record was Amy Grant. What role has Grant played in your story?

Well, I heard someone sing “Baby Baby” at a local talent show and begged my mom to take me to the record store at Hamilton Place Mall in Chattanooga so I could buy the Heart In Motion album. And in that moment, I fell in love with Amy Grant for the rest of my life. It was my first CD and my first step into music, and I’m so glad it was.

“When I finally stopped and looked around, I fucking lost it. I just didn’t think this is where I’d be at 33. Moving into a one bedroom alone because the person I loved left. I didn’t think I’d still be begging people to come to my shows. I thought my family fences would mend. That I would be at my sister’s side when she had child #3. I don’t mind being alone and there are actually things I love about the silence.” What are some ways you make sure to take time to take care of yourself in the silence?

Weed and gin, mostly. Okay, that’s a joke — but hey it has been a long two and a half years of being indoors. Truthfully, I do a lot of free writing — it’s therapeutic to me. When I was younger (and Christian) I used to call it “quiet time” but once I took the religious aspect out of it, it became an even more helpful tool to cleanse the palate, think a little more clearly, and find new inspirations.

“His husky tenor has an attractive intimacy that contrasts nicely with a percussive, country-rock production on his new single.” Music Row Magazine, DISCovery honoree for “Wild Ride,” co-written with Mylen. “Like they say — it’s not about where you end up, it’s about the journey you took to get there. Well, I have had some pretty set dreams since I was six years old, so “getting there” was all I ever wanted to do. But as I’ve gotten older, I’ve realized the magic really is in the space between. And let me tell you, my path has been a pretty incredible one. This song is a marker for me — a chance to reflect on the past both the good and bad. And more importantly, a chance to look forward at what’s ahead because I truly do believe all my best days as an artist and as a human being are still ahead of me.” What is on your artist bucket list?

I’m a Tennessee boy, it’s in my blood. So I want to play the Opry — it’s been the ‘thing’ on my bucket list for as long as I can remember. And it’s close…I can feel it.

Two years ago you released “Hurt People,” featuring Cam. “I’ve always connected with country music for its storytelling, but for the LGBTQI+ community — we are often told not to tell our story. Though I don’t believe a person has to be queer to find themselves in the lyrics of this song, “Hurt People” is one of those untold stories.” That song is your story, your family’s response to you coming out. You shared that, “I have 10 nieces and nephews I don’t really know. I never thought it was possible to have an honest relationship with them. My brother in-law didn’t want me to touch them without permission — it made him uncomfortable. My baby sister would constantly reiterate how she “didn’t agree with my lifestyle” in front of her kids. My parents made it very clear they didn’t want any of their grandkids to turn out like me. It was an untenable situation, so I left. I gave up having a relationship with these sweet kids because as much as I care about them, I care about me too. There is nothing and no one worth giving up your own dignity. I know who I am. And as much as I wish I could explain to my nieces and nephews why they have an uncle in California that never comes to see them, I can’t. But the God’s honest truth is…one day I hope I can.”

You wrote “The God’s Honest Truth,” the new album’s last track, as a love letter to your nieces and nephews that you continue to be mostly estranged from. What are some ways you’ve found help you cope through the ongoing family estrangement?

Well I think therapy is important — safe guarding our mental health is just about the best thing we can do for ourselves. But like I said — I love those kiddos. I love my mom, and family. But I love me too — which took me a really long time to be able to say. Especially when the ones you love most are telling you all their reasons not to. So it’s a complicated and tricky situation but my belief is if you ever have to give up or sacrifice your own self respect to fit in…then maybe that’s not the space for you.

Tour dates. What can fans look forward to at the shows to support the new album?

Nudity! That’s a joke. But honestly, this tour brings together years of work and growth as a musician.

We have a full band for a few shows, with some extraordinary musicians including my producer Julian Hoffman Beechko.

So much hard work has gone into putting this show together and I’m itching to take it on the road. So if we are coming to a city near you, and somewhere, somehow along the way my music has touched you or meant something to you in some way, I hope you’ll come because that would mean a lot to me.